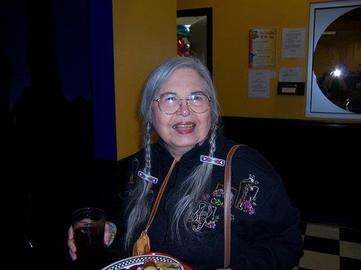 (+)Myrtle Juanita Wilkerson was my wonderful grandmother.  She had 7 children and more grandchildren and greatgrandchildren than you could shake a stick at.  I was the first of the many grandchildren, which put me in an eviable position.  I was so close in age to my aunts and uncle that I called her "mom" instead of grandma.  Later, she became NiNi Mom to everyone, but that nickname came from another grandchild, (+)Melissa.  She was like Old Mother Hubbard in that she had so many children that she didn't know what to do.  But Mom knew what to do.  She had the gift of letting you know that you were special to her, no matter how many people vyed for her love and attention; she had enough for all.  She won't be remembered for keeping a clean house, but instead her legacy was love.  She took every opportunity to try and teach Cherokee vocabulary.  In her letters and emails and visits you always came away knowing a new word or two.  Though she was short and small in stature, she was able to command respect; yet if she took the flyswatter to your hiney because of your transgressions, you usually had to fake cry so she would stop the "whuppin."  I was treated like one of her own children, not like a grandchild.  She enjoyed coffee and toast.  She was a night owl.  She shopped at Tuesday Morning year round for little gifts.  She had action figures (which she called "uglies"), or candles, or tins, or underwear, or socks, to give to all. She supported me through some of the toughest times in my life.  Even though we were separated by miles, I loved to hear her voice when she called.  And when she called, we were on the phone for hours. Oh, how I would love to see her name on the caller id and pick up and hear her voice again.  Because of a neuropathy, she was occasionally hit with uncontrollable coughing attacks. I can still hear it and I cherish it.
She was extremely proud of her Cherokee blood.