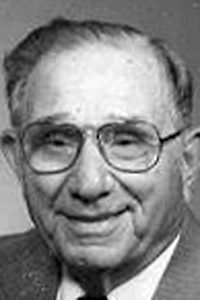 Marion J., 94, of Tulsa, passed from this life into the presence of his Lord in Tulsa on Monday, August 3, 2009. He was born in Ames, OK on January 25, 1915, one of seven children born to Perry Smith  and Mabel Emma (Root). He graduated from Southard Public Schools in 1933 and continued his education at Southwestern Institute of Technology in Weatherford, OK. Marion married Eileen Leola Fry on June 28, 1942. She preceded him in death on June 25, 1995. He was a member of Christ United Methodist Church and a former member of several other Methodist congregations in the Sand Springs and Tulsa areas. Marion was retired from National Tank Company (CE Natco, Combustion Engineering Co.) where he was employed from 1944 to 1980. Marion has touched many lives and was a great Christian example for many. Survivors include: two daughters, Iris Cooper and husband Rick of Elizabeth, CO and Lou Ann Coopet of Peyton, CO; 4 grandchildren; 9 great- grandchildren; 3 step-grand children; and 8 step-great-grand children. He is also survived by one brother, Perry and wife Bobbie of Tulsa; and four sisters, LaVerne Sykora, Ferne Pratt, Alice Epps, and Marilyn DeMoss and her husband Dean. Preceding him in death were his parents, and a brother, David F. In lieu of flowers the family suggests that contributions be made to Christ United Methodist Church, 3515 S. Harvard, Tulsa, OK 74135 or Oklahoma Methodist Manor, 4134 E. 31st, Tulsa, OK. Marion had lived at the Manor for the past 19 years. Visitation will be Wednesday, August 5th and Thursday, August 6th from 8 a.m. to 8 p.m., and funeral service will be at 10 a.m., Friday, August 7th at Christ United Methodist Church with Dr. Robert D. Pierson officiating. The family will be greeting friends at the funeral home from 6 to 8 p.m., on Thursday. Interment will follow at Ames Cemetery in Ames, OK under the direction of Mobley-Dodson Funeral Service. Condolences and messages to the family may be left at the funeral home